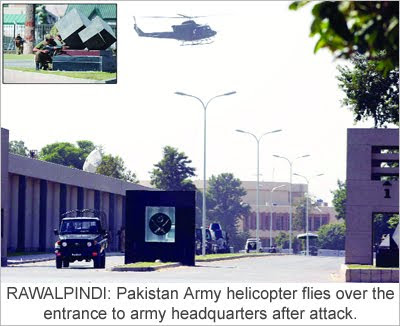 The General Head Quarters (GHQ) Operation has been completed successfully, Dunya News Sunday reported. The forces got 39 hostages released while four terrorists got killed and three hostages embraced martyrdom in the operation. One hostage was injured. On early morning today, the blast and firing sounds were heard from the security building of the GHQ.
The operation was done from all the four directions while choppers kept monitoring the GHQ building during it. The head of terrorists Aqil alias Dr. Usman has also been arrested in injured condition. ISPR DG Major General Athar Abbas told Dunya News when Dr. Usman was arrested, he blew up the gathered explosives injuring himself and five other security officials. Two SSG commandos also got injured in the operation. He said that 39 detainees had been freed. He told that four terrorists were killed and two of them were wearing suicide jackets.
The Major General informed that hostages were in better condition and had been shifted to the safe location. Some eight to 10 terrorists clad in military uniform attacked the first check post of the GHQ in the most sensitive area of Rawalpindi and threw hand grenades. Six officials including a Brigadier and Lt. Colonel were martyred in the operation. Escaped terrorists were surrounded by the forces near the second check post on the other side of the GHQ where terrorists held 28 people hostage. Careful strategy was adopted during the operation to minimize the loss of lives.
Posted by Chief Editor at 8:26 PM 0 comments 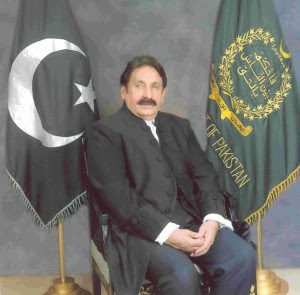 Hon’ble Chief Justice of Pakistan Mr. Justice Iftikhar Muhammad Chaudhry took suo moto notice on an application of a lady resident of Gujrawala who is under illegal confinement of an influential in Pano Aqil, Sukkar, Sindh. She alleged in her application that Saifullah S/o Inayatullah Cheema betrayed and raped her. She wanted to lodge FIR against him but his brother Amanat threatened her of dire consequences. He kidnapped and sold her to an influential in Sindh. She further alleged that she was forcibly married with Saifullah against her will and consent and she is still under captivation.
Hon’ble Chief Justice of Pakistan Mr. Justice Iftikhar Muhammad Chaudhry has directed PPO Sindh to recover the abductee and produce her before the Court on 13.10.2009 and has further directed PPO Punjab to explain whether any case of her abduction has been registered in Gujranwala or not and report be sent on 13.10.2009.
Posted by Chief Editor at 12:13 AM 0 comments 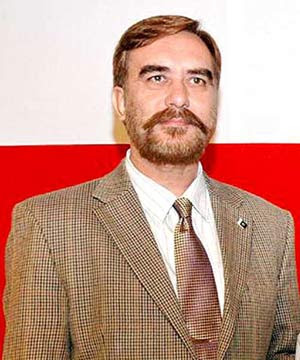 The Ansar Burney Trust contacted the Iran Government on humanitarian grounds to bring back the dead bodies of 17 trafficked Pakistanis died in an accid...ent in Iran on 11th of September, when their vehicle fell off a hill and since their dead bodies are now lying at Imam Reza Hospital, Sham Hospital and two other Hospitals in Tehran.

Mr. Fahad Burney, Vice Chairman of the Ansar Burney Trust is now in contact with the Iran Government to bring these dead bodies to Pakistan so that their family members would be able to see their faces before burrial as per their Islamic traditions in Pakistan.

Fahad Burney said that these all were belongs from Gujrat, Mandi Bahauddin, Gujranwala and other parts of Punjab.

Ansar Burney Trust said that as per reports 43 Pakistanis were going illegally to Turkey via Iran to go to Europe after paying Rs. 600,000 to an Agent in Pakistan. The criminal Agent after taking 600,000 from each Pakistani arranged visa (fake) to take them to Europe on a promise of better future.

The Expert Advisor on Human Rights in the United Nations at Geneva and Chairman of the Ansar Burney Trust, Mr. Ansar Burney has demanded the Government of Pakistan to bring these cruel and criminal Agents to Justice to stop further human trafficking from Pakistan.

The Ansar Burney Trust will bear all the expenses to bring these back to pakistan, purely on humanitarian grounds as these families sent their loved ones for a better future in Europe after taking loans on interest.