Pakistan Military Chiefs Call for Easing of Tensions With India

Dec. 30 (Bloomberg) -- Pakistani military chiefs called for an easing of tensions with India triggered by last month’s terrorist attack on Mumbai and a resumption of peace talks between the nuclear-armed neighbors.
Pakistani Army chief General Ashfaq Parvez Kayani, in a meeting with China’s Vice Foreign Minister He Yafei yesterday, “highlighted the need to de-escalate and avoid conflict,” according to a statement from the military.
The call came as U.S. Secretary of State Condoleezza Rice expressed concern over escalating tensions when she spoke by telephone with Pakistani President Asif Ali Zardari and Indian Foreign Minister Pranab Mukherjee, the State Department said.
Pakistan last week reportedly redeployed troops from tribal areas near Afghanistan to the border with India as tensions between the nations mounted. India and Pakistan have fought three wars since independence in 1947, two of them over Kashmir, a Himalayan region divided between them and claimed in full by both.
Rice said that with tensions already high, “neither side should be taking actions that increase” them, State Department spokesman Gordon Duguid told reporters yesterday.
She noted that Pakistan had “made some positive steps but that these steps need to be continuous, that we need to have both sides work together to find the perpetrators of the Mumbai attacks,” according to Duguid.
‘High Alert’
Pakistan has put troops along its eastern border on “high alert” and canceled soldiers’ leave until April, Dawn News Television reported last week.
India ordered a “pause” in the five year peace process after accusing elements in Pakistan of being behind the Nov. 26 29 attacks on Mumbai that killed 164 people. Pakistan has asked for evidence to back up that accusation.
India and Britain have blamed the Mumbai attacks on Pakistan-based Lashkar-e-Taiba. The militant group received weapons and logistical support from Pakistan’s main intelligence agency for attacks in Indian Kashmir in the 1990s, according to Indian and U.S. officials. The group was banned in Pakistan in 2002.
India has demanded Pakistan dismantle terrorist networks operating from its territory and has sought to build global consensus on action against terrorism following the attack.
Pakistan should take “demonstrative” action against terrorists, said Anan Sharma yesterday, India’s junior foreign minister, state-run broadcaster Doordarshan reported.
“India is showing maturity by maintaining restraint, but restraint should not be seen as weakness,” Sharma said.
In talks with He yesterday, Pakistan’s chairman of the Joint Chiefs of Staff Committee General Tariq Majid reaffirmed his country’s commitment to regional peace and cooperation.
Majid “emphasized the need for avoidance of provocative belligerent posturing, initiation of reciprocal measures for immediate de-escalation and earliest resumption of the peace dialogue” during talks with the Chinese envoy.
China is a key ally of Pakistan and He was dispatched to the region two days ago to prod the South Asian nations into resuming dialogue.
Posted by Chief Editor at 4:10 PM 0 comments

Staff ReportKarachi: South District and Session Judge Fahim Ahmed Siddiqui adjourned the hearing of the foreign currency scam case against Hanif Kalia, Javed Khanani and Munaf Kalia till December 26. The adjournment came after Deputy Attorney General Aamir Raza Naqvi, appearing as Special Public Prosecutor (SPP), remained absent.
The court expressed anger over the absence of the SPP and observed that if the prosecutor remains absent on the next date of hearing, the case will be decided ex-parte. Regarding an application by the defence counsel highlighting the denial of proper medical facilities to Hanif Kalia, the court ordered prison authorities to shift him to the Jinnah Postgraduate Medical Centre (JPMC).
The court also ordered the JPMC Additional Director to personally attend to the accused and submit a medical report on the next date of hearing.
Posted by Chief Editor at 3:23 PM 0 comments

LAHORE: Hafiz Saeed, chief of the banned Jamaatud Dawa, cannot be tried without solid proof, Defence Minister Ahmad Mukhtar said on Wednesday. He was talking to reporters outside parliament during a break in the meeting of the parliamentary committee on national security. According to a private TV channel, Mukhtar said Saeed had been detained under the Maintenance of Public Order (MPO) regulation, which only allowed detaining a citizen for 90 days.
The detention could be extended, he said, but India had not given solid proof to the Pakistani government about the involvement of Saeed or the banned Lashkar-e-Tayyaba in the terrorist attacks in Mumbai last month. “In the absence of solid proof, neither Hafiz Saeed nor any other leader detained at the moment can be tried in any court of law,” the channel quoted him as saying.
The crackdown against banned organisations including the Jamaatud Dawa would ensure the Pakistan soil is not used for terrorist activities, Mukhtar added. He said Pakistani army was on high alert despite India’s assurance it would not go to war.
Posted by Chief Editor at 4:00 PM 0 comments 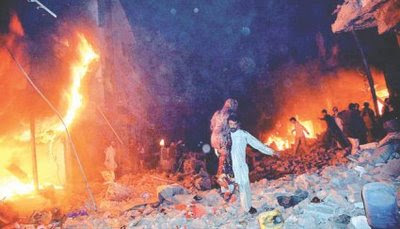 PESHAWAR " At least 25 Eid shoppers were killed and over 100 others injured as a bomb exploded in the most-congested locality of Peshawar Friday evening. Another 10 Eid shoppers were killed when a suicide bomber struck in a market in Orakzai Agency earlier in the day.
The high-intensity explosion occurred in front of a hotel, which is surrounded by an Imambargah, plastic factory, scores of shops and residences, in Koocha Risaldar located adjacent to historical Qisa Khawani Bazar here.
The authorities so far confirmed 25 deaths and injuries to 138, out of which more than 100 have been admitted in Lady Reading Hospital. The victims included women and children. As a result of the blast, electricity supply all over Qisa Khawani and its surrounding areas got disconnected. The hotel, Imambargah, plastic manufacturing and storing units, shops and several houses caught fire.
The disruption in electricity supply and outbreak of fire in the locality hampered the rescue activities.
Posted by Chief Editor at 4:09 PM 0 comments

ISLAMABAD - US Secretary of State Condoleezza Rice, who dashed to Islamabad Thursday to defuse tension between Pakistan and India in the wake of Mumbai attacks, urged the Pakistani leadership to take ‘robust’ and ‘quick’ action against those involved in terrorism.Secretary Rice, who met President Asif Ali Zardari, Prime Minister Syed Yousuf Raza Gilani and Army Chief General Ashfaq Parvez Kayani during her brief stay here, told the journalists later that Pakistan had agreed to cooperate and share information with India about those involved in the assaults in Mumbai.
She said both India and Pakistan were willing to work together to root out the perpetrators of attacks. Rice said, “Pakistan is very committed to the war on terror and does not in any way want to be associated with terrorism elements and is, indeed, committed to rooting them out wherever they find them.” However, she also urged Pakistan to take a hard line on terrorism. “The global threat of extremism and terrorism has to be met by all states, taking a very tough and hard line,” she said.
President Zardari, earlier in his meeting with Secretary Rice, pledged Pakistan would take strong action against anyone on its territory found to have been involved in the Mumbai attacks.The President said he was determined that Pakistan would not be used to orchestrate attacks or shelter terrorists such as those who committed last week’s outrage.He told Secretary Rice he had asked India to see the attacks as a chance to work together rather than be at odds with one another.
Posted by Chief Editor at 11:45 AM 0 comments